Mackay SLSC patrols the Mackay Harbour Beach from September to the end of April on weekends and public holidays.  The beach patrol consists of a team of volunteers rostered on duty for specific times and dates. Once you turn thirteen and successfully complete your SRC you may join a patrol team and commence patrols as directed by the Club Captain.

The patrol teams and roster is put together by the Club Captain, who co-ordinates all patrol members activities including rescues, first aid and patrol activities. Your roster will be emailed to you prior to the patrolling season and will also be available on the club website.

The following category of members is required to do patrols:

All members who wish to compete at any surf carnival must be financial, proficient and have completed a minimum number of patrol hours, (refer to surf sports section). It is a requirement of your membership that you attend every patrol you are rostered for or find an equivalent and proficient replacement for your patrol.

It is compulsory to have the correct patrol uniform whilst carrying out beach patrols, as issued by the Patrol Captain.  Your patrol uniform should not be worn outside of patrolling duties as stated in SLSQ uniform policy. 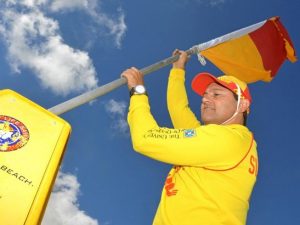 The Surf Rescue Certificate is the first certificate towards gaining your Bronze Medallion.  It gives the holder the ability to perform patrols and water safety duties, essentially working as an apprentice to Bronze Medallion Holders. SRC courses are usually run concurrently with Bronze courses to encourage full development.